The frieze from the Parthenon represents a procession to the Akropolis of Athenians celebrating the Panathenaia, a festival held every four years to honor Athena, the city's patron deity. There were athletic competitions, sacrifices, and the procession culminating in the presentation of a new peplos (dress) that was draped over an ancient wooden image of the goddess. The Parthenon's continuous frieze, to which these three slabs belonged, was sculpted in low relief and surrounded the entire building within the peristyle (colonnade). These riders on galloping horses are most likely to represent the tribes of Athens gathering to compete in the Panathenaic Games and to celebrate the birthday of Athena. In the early nineteenth century, much of the Parthenon’s 515-foot frieze was removed from the building and shipped to London, where the blocks now remain on view in the British Museum. Those blocks that are in Athens are on exhibit in the new Akropolis Museum. Cast no. 8 is in need of repair. 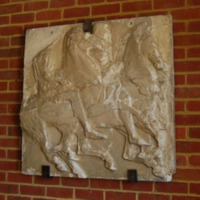 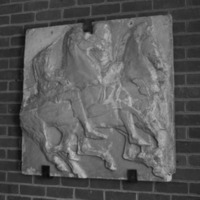 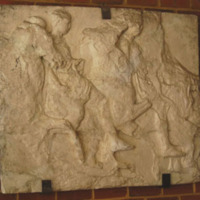 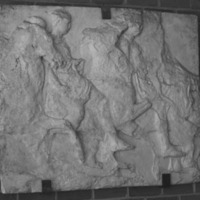