This marble well-head was probably made in Rome during the later first century CE, and may have ornamented a luxuriously appointed Roman garden. Its subject is a reflection of the scene of the Birth of Athena as it was carved for the east pediment (gable) of the Parthenon (448-432 BCE) in Athens. Since those figures from the Parthenon have been lost, this relief has served scholars as a guide in reconstructing the original appearance of the scene. Zeus, seated on his throne, is the central figure. Behind him stands Hephaistos with the mallet that he has just used to crack open Zeus's forehead. To the right of Zeus, a Nike (Victory) holding a victor's wreath flies towards Athena, who has just sprung from her father's forehead. Fully grown and wearing chiton, himation, aegis, and helmet, Athena carries a round shield on her left arm. To the right of Athena are the three Fates, spinning the thread of life.
~Helen Watson Obiechina


See Ian Jenkins, The Parthenon Sculptures (Cambridge, Mass., 2007); Evelyn B. Harrison, "Athena and Athens in the East Pediment of the Parthenon," American Journal of Archaeology 71, 1967, 27-80; Rhys Carpenter, "The Lost Statues of the East Pediment of the Parthenon," Hesperia 2, 1933, 1-88. Figure 9. Figure. photograph of no. 9 by Andrew Zimmerman. Figure. Anonymous engraving, early 19th century. Rolled-out view of the Madrid Puteal. 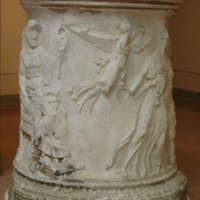 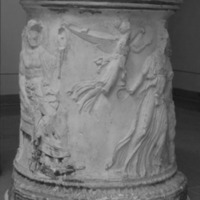 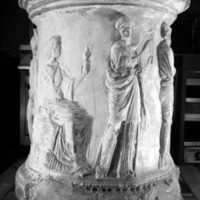 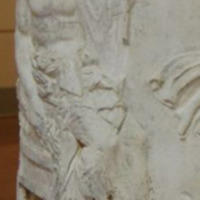 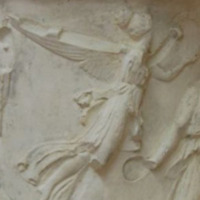 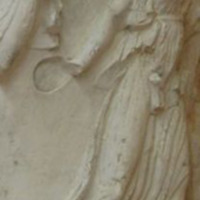 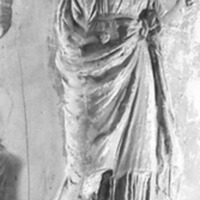 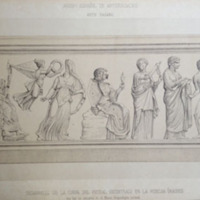 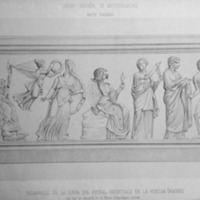