The false stupa gable is a Gandharan decorative sculpture-type belonging to a Buddhist shrine. This example, dated between the first and third centuries AD, has three narrative registers flanked by two devotional figures. In the lower register, the Enlightened Buddha delivers his first sermon: he is seated; his gesture is that of teaching; the bodhi tree spreads over him; and the wheel of the law is on the platform beneath him.

The top register depicts the veneration of the Buddha’s bowl. Incised lines on the enshrined bowl suggest the bowl with multiple rims known from one story of its origins. In this version, each of the four Lokapalas, or directional guardians, presents the Buddha with a bowl. Not wanting to choose between the gifts, the Buddha fuses the bowls into one with four rims (Kuwayama). Worshippers and a pair of icthyocentaurs venerate the bowl at the center, resting on a curtained pedestal (Ingholt). Reports by Chinese monks Faxien and Xuanzang suggest that the Buddha’s bowl was enshrined in Gandhara.

No other Buddhist art has images of the bowl, indicating that its representation and veneration are restricted to Gandharan art. The middle register is more problematic: rows of worshippers flank the only clearly identifiable figures: the standing Buddha in the center and to his left Vajrapani, the Buddha’s club-wielding guardian in Gandhara. One of the two large devotional figures at the sides is haloed, the other is not: their identity remains a mystery. The style of the relief is quintessentially Gandharan. Once dubbed Greco-Buddhist, scholars emphasized the Greek influences on the style and saw Greek art as the impetus behind the first iconic representations of the Buddha. Shifting understandings now focus on the blending of Indian, Greek, and Persian styles inherited from the various polities that controlled the region. Unified in the Gandharan style, they spread along the Silk Roads with Buddhism itself.

Elements of Hellenistic influence in the Gandharan style include the “straight, sharply chiseled nose and brow, classical lips and wavy hair” of the Buddha. Other Mediterranean influence appears in his “diaphanous, toga-like robe” (Hopkirk, 23). These elements spread to the East and back into greater India where they were again transformed. The original sculpture is in the Lahore Museum, Pakistan. It may have been acquired by way of the Victoria and Albert Museum, London. In 1802, the Punjab government had casts of 24 schist sculptures manufactured for the V&A (V&A accession numbers 3308-1883; 3380-1803; 3206-1883; and 3307-1883) (Errington). 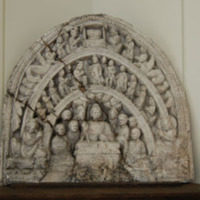 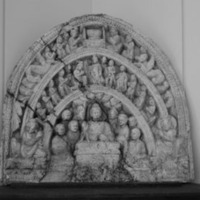 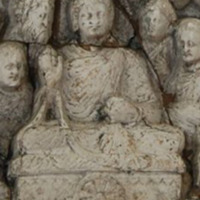 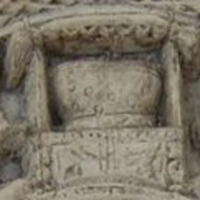 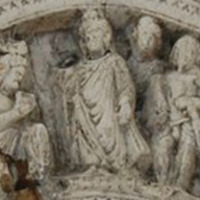 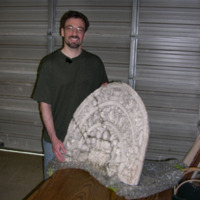 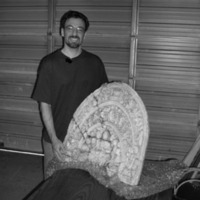