The lower register of this two-register relief panel may show a narrative depicting the brothers Jaya and Vaijaya watching their parents place offerings in the Buddha’s bowl.

Attempting to emulate their charitable behavior, the young boys offer him some of the dust with which they have been playing. Impressed by their behavior, the Buddha predicts that Jaya will be reborn as the future king Asoka, Buddhist ruler of North India in the 3rd century BCE, and his Brothers as Asoka’s chief vassal Radhagupta. Several devotees accompany the Buddha including Vajrapani, a Gandharan version of the Greek hero Herakles, who is often shown guarding the Buddha in Gandharan sculpture. In the upper register, the seated Buddha is seated on a lotus throne flanked by royal or divine devotees. The two men closest to him are seated in a pose associated with kingship and may represent the kingly reincarnations of the two boys in the bottom register. However, this representation would be highly unusual. 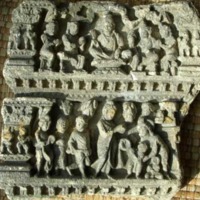 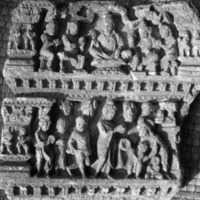 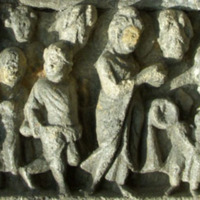 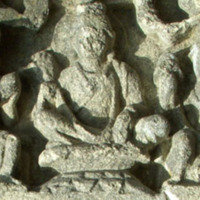