The shallow relief shows a griffin attacking a deer that he has brought down. His wings are spread, his claws are fixed in the deer's shoulder, and he opens his beak wide to deal the fatal blow. The upper border consists of a geometric maeander; the lower border appears to contain rosettes within squares. This small fragment was given to the British Museum by Algernon Percy (1792-1865), the fourth Duke of Northumberland. 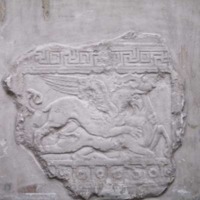 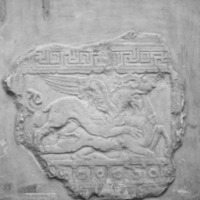