This famous relief shows a profile view of Antinoos (110-130 CE), a boy from Bithynia who was lover of the Roman Emperor Hadrian (ruled 117-138 CE). Antinoos is shown in a youthful idealized form, with thick curly short hair accented with a garland. In the restoration, he is partially draped in classical style, and he gazes at a garland that he holds in his left hand. In 130 CE Antinoos drowned mysteriously in the Nile, leaving a grief-stricken Hadrian, who promptly granted Antinoos an apotheosis. The emperor named a city after him (Antinoopolis), established a cult in his honor, his face was place on coins and medals, and statues and reliefs of him were scattered throughout the Roman empire to celebrate his memory. Usually Antinoos is depicted in the classical style. Images of him may bear a striking resemblance to one or more of the gods, such as Apollo, the god of truth, Dionysos, the god of wine, Vertumnus, the god of season and change, and even Osiris, the Egyptian god of the afterlife. Discovered in Hadrian’s Villa at Tivoli in 1735, the piece was first owned by Cardinal Alessandro Albani, who had the relief restored in 1736 and took it to his home, the Villa Albani, on the outskirts of Rome. The fanciful modern restorations are missing from this broken plaster cast. Johann Joachim Winckelmann, who worked for Cardinal Albani, wrote enthusiastically about the relief. In 1798 the relief was taken as booty by the French and was recorded as being on display in the Musée in Paris in 1802-03. It was removed from the Musée in 1815 and returned to the Villa Albani. 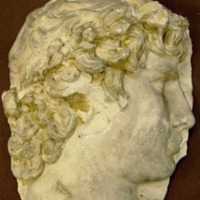 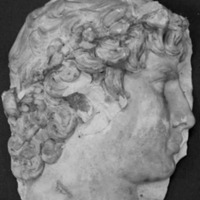