Relief of dancer.
From Athens, the Theater of Dionysos, 1862.
Pentelic marble.
First century BCE.
Athens, National Archaeological Museum no. 259.
H 44 in., W 25 in.
Metropolitan Catalogue: Cast no. 881.
Long-term loan.
Cast Location:  SUB I top floor.  Additional copies of the cast can be found outside Robinson B, Harris Theatre, and in the Performing Arts Bldg.

This is thought to be one of three dancers carved in relief on marble slabs that were probably set up to form a triangular base for a three-legged bronze tripod-stand holding a bronze cauldron. The style is known as neo-Attic. The dancer wears a chiton and himation, and probably represents a nymph or one of the Horai (chorus). During the 800-year lifespan of the Theater of Dionysos, thousands of tripod-monuments were erected to honor the winners of Athenian dramatic contests. Concrete casts taken from this plaster cast can be seen in the Performing Arts Building, outside Harris Theater, and outside the Prince William Campus. The casts were made by sculptor Nick Xhiku. He poured a carefully mixed solution of cement, sand, marble chips (for color), and water into a rubber mold that he had made of the original cast, pouring slowly and inserting steel reinforcement rods. Unlike the plaster cast, the concrete casts can be installed outdoors. For the full process, see no. 52 below. ~Ellen McV. Layman 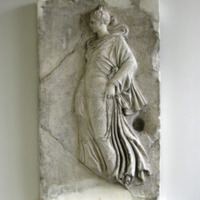 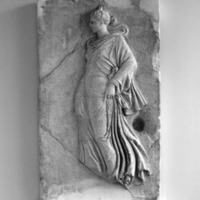 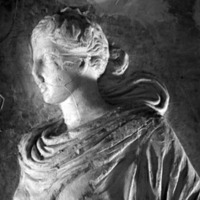 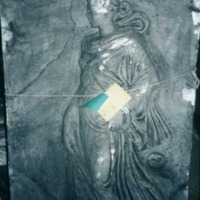 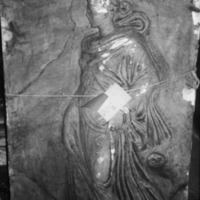 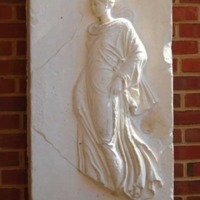 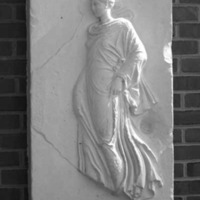 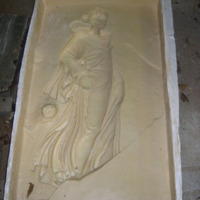 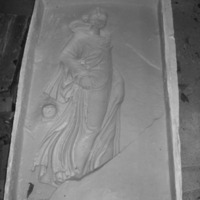 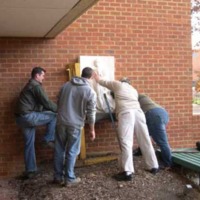