Head of Aphrodite from a lifesize statue.
From Ostia, port of ancient Rome.
Parian marble.
Style of the 4th century BCE.
London, British Museum.
H without base 14 in.
Metropolitan Catalogue: Head of cast no. 696.
Cast Location: Krasnow Bldg

This head comes from a Roman marble sculpture carved in the late Classical period in the style of Praxiteles. The full statue represents Aphrodite emerging from a bath, wearing drapery around her legs and sandals. Her hair is parted in the middle and knotted in back. Her expression is tranquil. In the cast, the tip of her nose has been restored. Gavin Hamilton excavated the statue in 1775, in the ruins of a bath complex. Charles Towneley purchased the statue.
~ Ashley Simpson 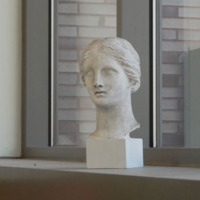 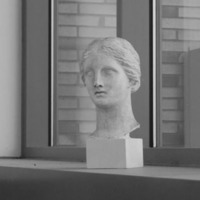 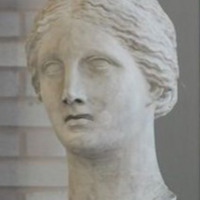