Head from a seated statue of Demeter.
Found in the sanctuary of Demeter at Knidos in Asia Minor.
Parian marble.
Ca. 350 - 330 BCE.
The whole statue is in London, British Museum. H without base 17 in. Metropolitan Catalogue: Cast no. 749.
Cast Location: Krasnow Bldg

Demeter, the Greek goddess of grain and of fertility, was associated with the underworld at Knidos, where she was worshipped along with other underworld deities, including her daughter Persephone, the wife of Hades. In this sanctuary, the seated sculpture of Demeter is portrayed as a model of Greek womanhood - serene, mature, and motherly, wearing a chiton and a mantle that veils her head. The statue is seated on a cushioned chair, her feet on a foot-stool. Her long hair is parted in the middle, with long locks falling onto her shoulders. Her eyes are deeply set, and her gaze is calm and perhaps sorrowful. The statue is usually thought to have been influenced by the work of the fourth-century-BCE artist Praxiteles. An expedition of London's Society of Dilettanti first noticed the statue in the Sanctuary of Demeter at Knidos, Turkey, in 1812. Charles Newton uncovered the seated figure and took it to London in 1858. The head was found at a later date, but the entire sculpture is in the British Museum.
~Ashley Simpson 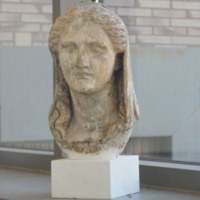 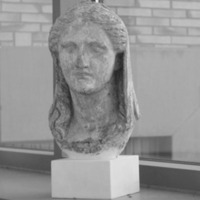 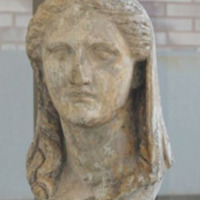 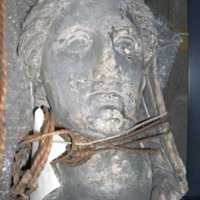 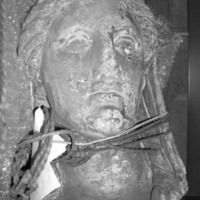