Head of Hermes of Andros.
Full statue found on the island of Andros.
Marble.
Style of the 4th century BCE.
Athens, National Archaeological Museum.
H without base 13 1/2 in.
Metropolitan Catalogue: Cast no. 707.
Cast Location: Krasnow Bldg

In the full statue, Hermes wears a cloak slung over his left shoulder, and leans against a tree trunk with a snake coiled around it. The statue was identified as Hermes because of the snake: it is one of the two that would normally coil around his wand (caduceus). This sculpture was frequently reproduced in the Greco-Roman world. 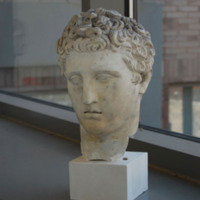 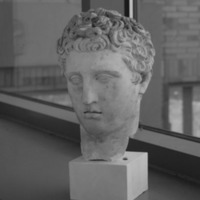 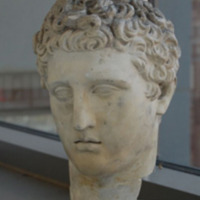