Orcagna’s gilded marble tabernacle, a memorial to victims of the Black Plague of 1348 and an inspiration to the living, soared almost to the ceiling of the church of Or San Michele. This scene from the life of the Virgin is carved on the back of Orsanmichele’s gilded marble tabernacle. This central portion of the scene shows the dead Virgin lying across her sarcophagus and surrounded by the Apostles. Christ hovers above, the baby in his arms representing his mother’s soul, and angels are shown in the background. The Virgin’s Assumption to Heaven is carved just above this scene. Although other sculptors may have assisted in the production of the tabernacle, the Latin inscription at the bottom of this relief shows that Orcagna himself sculpted the Dormition and the Assumption of the Virgin in 1359.

Or San Michele was built in 1337 in what was then the grain market of Florence. Each guild in Florence honored its patron saint with an image set in a niche of the façade of this church, by sculptors such as Donatello, Ghiberti, Giambologna, and Verocchio. The artists' guild collected donations and commissioned Orcagna to design and construct the focal point of the church - its tabernacle. The gilded and inlaid marble tabernacle honored the artists' guild's own patron saint, the Madonna, who was also the patron saint of the city of Florence. 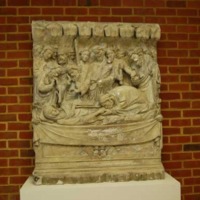 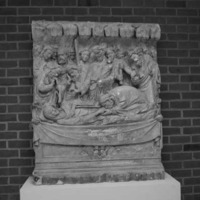 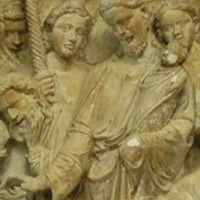