St. Benedict's sixth-century rule required clergy members to sing the daily offices of the church while standing at their places in the choir of the church. They were rarely allowed to sit. Some elder monks used a staff or crutch to relieve their discomfort during these long hours. The misericord, from the Latin word misericordia (pity), was a hinged wooden seat that appeared in churches as early as the eleventh century. The long robes of the monks somewhat disguised the fact that the monks were sitting on these narrow misericords, some of which were elaborately carved on the undersides, so that they could only be seen when the seats were raised. Their subjects included domestic brawls, fantastic creatures, mermaids, craftsmen, shepherds, Bible stories, fables, sirens, unicorns, various animals, and Medieval legends. Many of them conveyed moral lessons.

Misericords can be found in the Medieval cathedrals, parish churches, and monastic churches of Germany, France, and England, and date to as early as the eleventh century. In Britain, on certain days in the church calendar, the choir was open to the laity, who, having stood through hours of services, would have had the opportunity to study carefully the images and stories represented in these carvings. This plaster misericord, painted to resemble wood, shows a woman using a bundle of sticks to beat a kneeling man. At the same time, the man is being made to do a woman's work of winding wool. Perhaps this was an admonition to men not to stick around the house too much, or perhaps it elaborates upon the evil nature of women. The image closely resembles that of Aristotle being beaten by Phyllis (or Campaspe), a common Medieval analogy for the evil nature of women. The same message is also conveyed in misericords, manuscript illuminations, tapestries, and stained glass, with an image of Phyllis/Campaspe riding a bridled Aristotle. 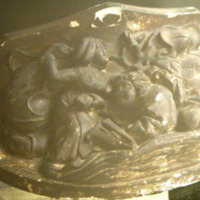 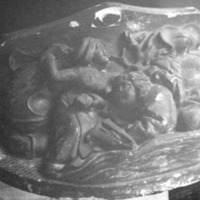 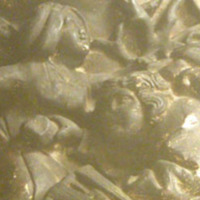