This slightly curved block is one of the slightly wedge-shaped blocks that surrounded one of the arched doorways of the cathedral. This block, from the right side of the arch, is carved with heads in slightly different positions, each one surrounded by leafy vines. The other voussoirs would have been similarly decorated, so that each of the inward-looking faces appeared to be looking at the scene carved in the tympanum, located over the doorway, between the arch and the lintel. Rochester is in Kent, southeastern England, on the route to Canterbury. The cathedral was built between the 11th and 14th centuries, but it was mostly complete by the middle of the 12th century. Opposite the cathedral is a Norman castle. 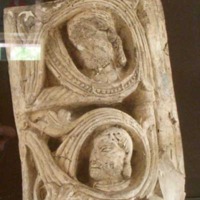 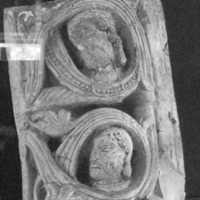 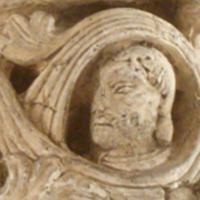