These two reliefs are from the left door of the west façade of the Gothic church of St. Maclou. The reliefs date to 1540-1541; the rest of this door dates to about 1555-1560. Carved wooden panels like this ornament the five doors on the western side of the church. The panels are carved in the Late Gothic, or Flamboyant, style. This style is characterized by highly decorative architecture and was the last phase of Gothic architecture before the Renaissance. All the door panels of the church are attributed to sculptor Jean Goujon (c. 1510-c. 1568), and they are considered to be his earliest works. b. 77 in. x 48 in. A decorative rectangular frame contains an equally intricate circular frame, within which shepherds and kings appear to be in conversation, while other shepherds watch and tend their sheep in a circular woven fence. One figure at the right appears to be falling off the fence. Cherubs or winds appear within each corner of the larger frame. A bottom panel, unframed, contains four draped male figures in high relief, standing in various positions, three of them bearded, but the second one from the left now missing his head. Between these four figures, in the background, stand three more figures, carved in lower relief. The one in the center is a bearded male, those at the sides are women. These figures all stand on an architectural base, like a mantelpiece, supported by decorated brackets with female faces in between. 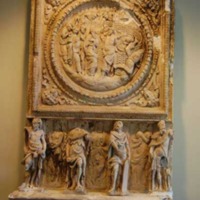 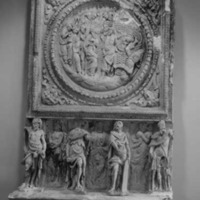 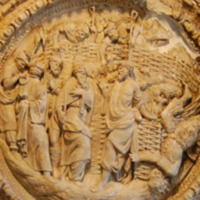 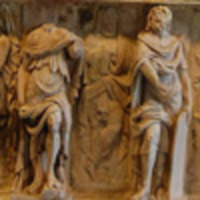 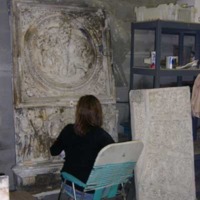 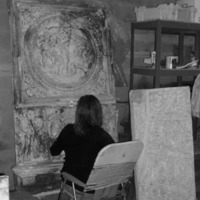