This young woman has wavy hair with a central parting, drawn back into an intricately woven knot at the nape of her neck, leaving only the lower earlobes exposed below the hair. There is no other ornament. The eyes are not incised, the nose is aquiline, and the cheeks are full. The general effect is one of control and serenity. The difficulty in identifying this woman is complicated by the tendency for portraits of Roman imperial women to resemble each other. Certain features of hairstyles that were fashionable among aristocratic women were imitated by women of other classes. As styles changed, the portrait sculptures were sometimes modified to reflect a more up-to-date coif. Individualized hairstyles make dating more difficult. In the British Museum catalogue, this head is tentatively identified as Faustina the Younger (c. 130-175 CE), the daughter of Antoninus Pius and wife of Marcus Aurelius. It is said to have been purchased from a private individual in Pozzuoli in 1771. When he was in residence in Italy between 1768 and 1772, the Englishman Charles Towneley (1737-1805), purchased most of the pieces in his collection. His sources there included old Roman collections, and objects from the Scottish painter Gavin Hamilton (d. 1797) and from the English banker Thomas Jenkins. Towneley left his collection to the British Museum, and a special building was constructed to hold it all.
~Ellen McV. Layman 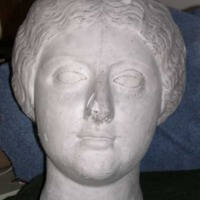 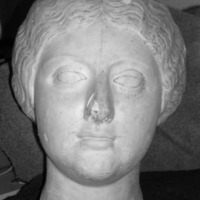