This Old Seer is one of the onlookers at the chariot race, which has not yet begun. The old man knits his brow and opens his mouth slightly in horror at his knowledge of what is about to happen. An uneven seam around the right shoulder shows where the cast-makers reconstructed parts of this figure that were missing on the marble original. The restorations of this and all the casts were overseen by Georg Treu (1843-1921), director of the German excavations at Olympia from 1875 to 1881, and curator of sculpture in Dresden's Albertinum from 1882 to 1915.
~Nathan Barber 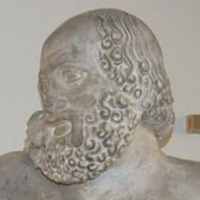