This head probably comes from a statue. The face is youthful and effeminate, and was originally identified as that of a woman. The head wears no wreath of vine leaves, which became the distinguishing feature of Dionysos in the later Hellenistic period. The long curly lock behind each ear probably extended to the shoulder. Dionysos came to the Greek pantheon from Phrygia. He injected a rash spirit of wine-drinking and intense mental frenzy, often manifested orgiastically. During the Archaic period of the sixth century BCE, he appears as a mature bearded god, but he grows younger during the fifth century, when he is portrayed as a youth, and he becomes more and more fleshy, sensual, and effeminate during the fourth century BCE and thereafter. Festivals were held in honor of Dionysos throughout Greece. In Athens, however, authorities toned down much of the festival's original madness. The Boston Museum of Fine Arts acquired the marble head in 1896 as part of a concerted effort to gather a collection of classical sculptures. The head was reported to have been found near the choragic Monument of Lysikrates (334 BCE) in what is now the Plaka region of Athens.
~Bill Pierce 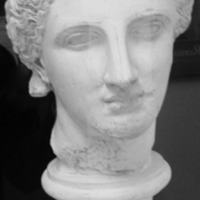