Sculptures from the pediments (gables) of the Temple of Zeus at Olympia.
Parian marble.
Ca. 456 BCE.
Olympia, Museum.
Metropolitan Catalogue: Cast numbers 468 and 469.

The first Olympic games were held at Olympia, supposedly in 776 BCE, and every four years thereafter until pagan celebrations were banned by the Roman emperor Theodosius in 391 CE. The temple of Zeus, built in the fifth century BCE, was the major building in the sanctuary, known as the Altis. The huge temple of Zeus is in the center of the sanctuary, and the gold and ivory statue of Zeus that it housed was one of the seven wonders of the world. The temple itself was constructed of plastered limestone, its sculptures of white marble from the Aegean island of Paros. The sculptures from the west pediment (gable) of the temple illustrate the Centauromachy, the war between the Greeks and their neighbors the centaurs, a mythical race said to be half man and half horse. The occasion was the wedding of King Perithoos, grandson of Zeus and king of the Lapiths. He invited the centaurs, who had too much to drink and began attacking the women and boys at the party. The sculptures in the east pediment (gable) of the temple illustrate the chariot race between Pelops and Oenomaus. Pelops was the suitor of Hippodamia, daughter of king Oenomaus, who did not approve of Pelops, and challenged him to a chariot race, as he had done with all previous suitors of his daughter. When he won those races, Oenomaus killed the suitor. Pelops defeated Oenomaus by replacing the linch-pins holding the wheels on the chariot of Oenomaus with wax: after the race, he killed the father of the bride. According to one story, that race was the founding event of the ancient Olympic Games. 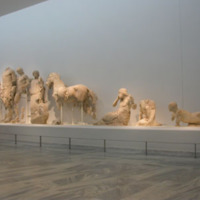 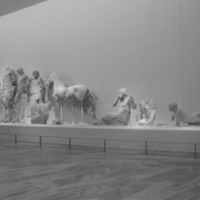 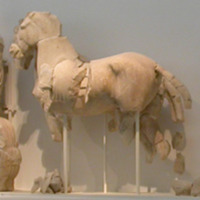