Thin hair combed forwards to cover his balding head, Julius Caesar's gaunt face and incised pupils give him a forceful presence and a commanding gaze. Since the Renaissance, Julius Caesar has held a powerful, yet controversial, fascination in western culture. Could Rome’s Republican government have withstood its internal political crises had Caesar not destroyed it? Or was the Republic in its death throes and was it only his seizure of control that assured Rome’s survival and opened the way for empire? Shakespeare portrayed Caesar as driven by personal ambition. Classical biographers were ambivalent, Suetonius highlighting his faults and virtues, and Plutarch focusing more on his courage and nobility.

The head typifies the traditional view of Caesar as resolute, courageous, and noble—the visionary founder of Rome as Empire. The British Museum purchased the head in 1818 from James Millingen, an English collector of antiquities. The head was said to have been discovered in Alexandria, but he had found it in Rome. It became one of the museum’s most prized and well-known classical Roman portraits. For more than a century reproductions, drawings, and photographs of the bust found their way into museums, private collections, and art books. (Its picture may still be seen on the Tufts University Perseus webpage for Julius Caesar.)

Skepticism over the bust’s origins began to surface in the 1890s when Adolf Furtwängler, a leading classical archaeologist, expressed doubts that the work was an authentic classical Roman bust. Nonetheless, the British Museum’s 1904 catalogue on classical sculpture, while noting Furtwängler’s reservations, maintained that the head was original. After all, Caesar’s hair was combed to the front, a device which Suetonius reported to have been adopted by Caesar when his baldness became an object of ridicule. The catalogue further stated that Caesar’s eyes were strongly marked. That observation should have caused hesitation since Roman marble sculpture did not show an incised iris or pupil until the time of the emperor Hadrian (r. 117-138).

The 1928 museum catalogue, again noting that some critics had doubts, confirmed it to be a genuine Roman bust of Caesar of ‘the falcon eyes’ (Dante, Inferno, IV, 123), ‘the consummate soldier, statesman, and man of letters.’ By 1953, the museum had accepted the inevitable. The head was unceremoniously moved from the Roman galleries and placed at the entrance to the museum’s reading room. What then of its origins? In 1960, the classical art historian Gilbert Bagnani called it a great piece of the Italian Renaissance. After a thorough examination, the Oxford classicist Bernard Ashmole concluded that it had been made about 1800, with the damage to the nose artificially caused by a nail-studded piece of wood or some other means of abrasion.

One expert has stated that the sculptor of the head may have borrowed features from a large statue of Caesar on Rome's Capitoline Hill and from a bust acquired by Pope Clement XIV for the Vatican in 1771. It might be said that this head of Caesar symbolized a traditional view of classical Rome’s empire and leadership which nineteenth-century England linked to a vision of its own imperial destiny. By the mid twentieth century, that vision was gone, and it was time for the demise of the head’s pedigree and its removal to the reading room. 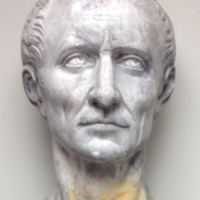 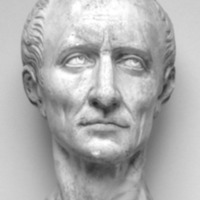 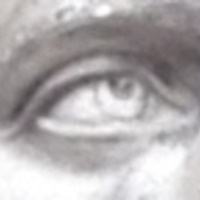