A clustered row of stone colonnette capitals, probably from the facade of a church. This decorative detail, consisting of birds, animals, and humans entwined or hanging among leafy tendrils right-side-up and upside-down would have originally flanked one of the portals of a church. Architectural details like these served not only as decoration but also to demonstrate the designer's knowledge of classical styles of architecture. It was seen as a mark of prestige to have such details incorporated into a structure, and it showed a level of mastery of that which had once been considered pagan. Furthermore, artists had the opportunity to be creative with a wide range of designs and subject matter. The subjects incorporated in these designs range from generic to pagan to Christian. 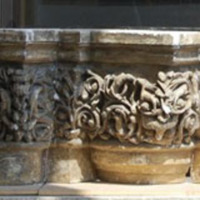 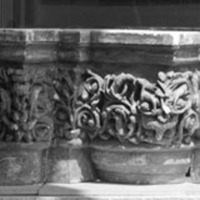 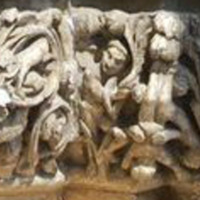