Notre-Dame-du-Port is a basilica that was first built during the 7th century. The church is in the region of the Auvergne in central France. This is a section of the lower right side of the triangular portion of this oddly shaped composite tympanum over the south entrance to the Romanesque cathedral of Notre-Dame du Port. For his baptism, Christ is immersed to the waist in stylized water. A kneeling angel to the right holds his clothes, and a now-headless John the Baptist to the left holds onto Christ's arm. On the actual tympanum, two other scenes from Christ’s early life are carved on the triangular portion, to the left of this one– the Adoration of the Magi on the left, and the presentation of Christ in the temple at the center. In the semicircular portion of the tympanum, Christ in Majesty is enthroned above the three scenes from his life. A descriptive inscription surrounds the entire frame of the triangular pediment. The tympanum was painted, and some paint remains on the original, including a blue background. Much of the damage done to the tympanum occurred during the French Revolution. 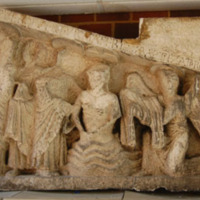 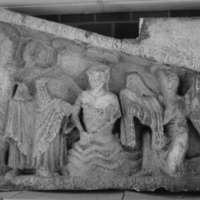 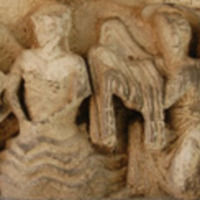 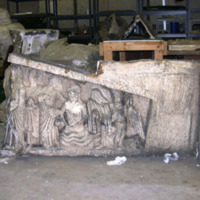 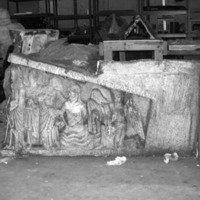