Relief of a portion of the wedding of Poseidon and Amphitrite, from the so-called Altar of Domitius Ahenobarbus.
Purchased in Rome in 1816.
Pentelic marble.
First century BCE.
Munich, Glyptothek.
H 30 1/2 in.
Metropolitan Catalogue: Cast no. 871.
Long-term loan.
Cast Location: Concert Hall 2nd floor

The scene of which this relief is a part represents the wedding procession of Poseidon/Neptune and Amphitrite. In this part of the scene a nereid (sea-nymph) carrying a gift-box rides over the sea on a taurocamp with a snaky tail (half bull and half sea-creature). At one corner there is a pilaster. The right horn of the taurocamp and the left foot of the Nereid have been repaired in the plaster. According to Greek mythology, Poseidon wanted to marry the Nereid Thetis, but, upon learning that the child she bore would be greater than his father, he decided against it and instead pursued her sister Amphitrite to the Atlas Mountains, where she had hidden from him. He was successful in his courtship. Although Poseidon and Zeus had both been interested in Thetis, Zeus decided that Thetis should marry a mortal, and that was Peleus. Their son was Achilles, the hero of the Trojan War. This relief was discovered in the Campus Martius (Field of Mars) in Rome along with three other panels which were decorated with a marine procession of Tritons and Nereids celebrating the marriage of Poseidon and Amphitrite. They are now in Munich. This panel depicts a Nereid riding a sea-bull, bringing a present for the wedding of Poseidon and Amphitrite. Another portion of the relief is in the Louvre. The reliefs are now thought to have decorated the base of a statue-group honoring the naval victories of Mark Antony. Additional sections of the relief, now in Paris, are made of a different kind of marble, and represent the taking of the census along with a sacrifice to Mars.
~Shellie Meeks 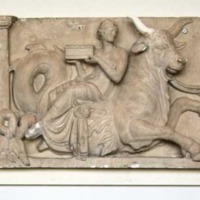 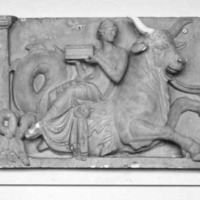 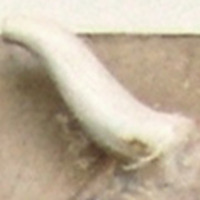 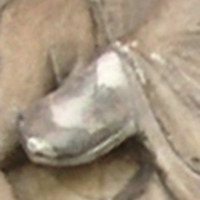 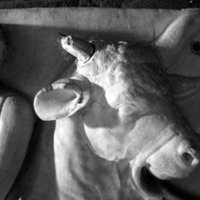 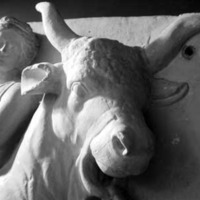