The Mausoleum at Halikarnassus was the tomb of King Mausolus (d. 353 BCE) of Caria in western Asia Minor (modern Turkey). It is thought to have been completed after his death by his wife/sister Artemisia. The tomb became one of the seven wonders of the ancient world, in part because of its colossal size (over 140 feet tall), and because it was decorated with statues and reliefs carved by some of the most famous Greek sculptors of the day. The tomb survived until the thirteenth century, when it was destroyed by an earthquake. Thereafter, much of the marble of which it had been constructed was carried off and used nearby for building materials. The Castle of St. Peter at Bodrum contains many blocks from the Mausoleum. This is one of the most famous reliefs from the tomb on the west coast of Turkey that was actually named the Mausoleum, from which the modern usage of the word derives. A Greek warrior, conventionally nude by classical artistic convention, has fallen on one knee, tries to protect himself with his shield, and looks over his shoulder at his vicious attacker, an Amazon, her feet planted firmly, her sword raised over her head to strike. She is clad in a tunic, as members of this warlike race of women are typically represented in classical art. At the left, part of an Amazon astride a rearing horse is part of the next scene. The site of the Mausoleum at Halikarnassos was first excavated between 1856 and 1858 by Charles T. Newton, an assistant curator at the British Museum, with a permit (firman) from the Turkish Sultan to remove the sculptures, many of which had been built into the walls of the castle of St. Peter, built by the Knights of St. John in 1402. Many of the sculptures and reliefs that had once decorated the tomb were taken to the British Museum in London, where they are now on display.
~Ellen McV. Layman 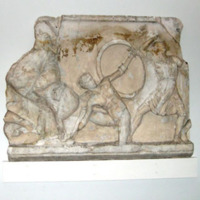 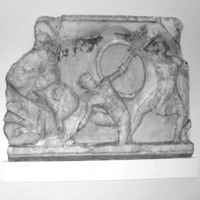 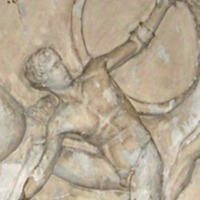 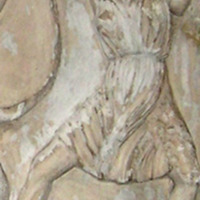